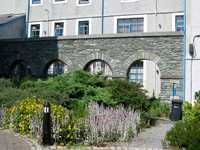 Remains of the old cloister, by the entrance to the Centre

As you approach the front door of the Centre, you see a series of arched windows. These mark the line of the cloister of the old convent. The windows have been refurbished with stained glass, in a design which matches the tall windows of the main hall, by Neil Williams of Beaumaris. The tower contains the old chapel bell — whose name is St Paul — and this can still be rung on special occasions. 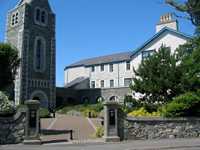 Housing development, where the nuns’ house was

The building on your right is now part of the local housing development, but it was once the nuns’ house. The nuns would leave their house and walk through the cloisters past the chapel to the school. The school was on the left of the Ucheldre Centre, where the car park and amphitheatre now lie. The centre looks tall, but it was dwarfed by the old school. 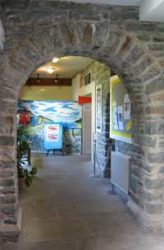 Part of what was the cloister, near the entrance

As you enter the Centre through the arched front door, you will find yourself in the old cloister. The main entrance to the hall is in front of you, but this is kept shut except for special occasions — as are the other small doorways, which hide a storage room and the old entrance to the tower.

Turning left and following the cloister around to the right means passing the foundation stone of the building — the foundation ceremony was carried out by Bishop Vaughan of Menevia in 1934. 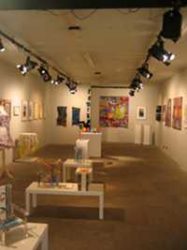 Turning right takes you from the cloister into the exhibition gallery. Above the entrance is a slate plaque carved by Inigo Jones of Penygroes commemorating the opening of the Centre by Charles, Prince of Wales in 1992. The blocked-off end of the cloister now contains a small bar where drinks are served during performance events.

The gallery itself is an intimate space which has been purpose-built to security and environmental standards which enables the Ucheldre Centre to accept all categories of exhibition. See the Exhibitions section for information on what’s coming soon. 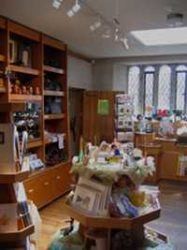 The gallery leads into the shop, which also acts as a booking office for centre events. There’s an oak door which has been kept from the original chapel and the new doors in the centre extension were made to match this.

The shop stocks a wide range of books, music, art and craft items. 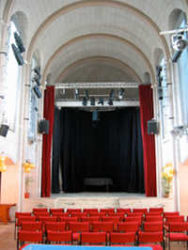 Turning left out of the shop takes you to the Ucheldre Kitchen. Turning right goes through what was once the sacristy of the chapel, and into the main hall.

The height and fine arched roof of the old chapel building, and the imposing side aisles make an immediate impact. The ethereal atmosphere of the hall always attracts special comment. The architect was Prof R.M. Butler of Dublin, a leading architect of his day. He proposed several designs, the final choice being in a modernised Romanesque style, with a tall square tower, making use of local stone. Although a building of the 1930s, its elegant, classical lines convey a much older impression. The building work was carried out by a local firm from Caernarfon. 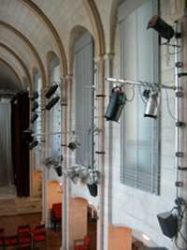 The walls look as if they are made of large blocks. In fact they are rendered stone or brick, with lines etched into the cement at intervals, reinforcing the impression of height as you look up. The curved western end of the hall, originally the apse of the chapel, housed the altar. A huge Italian crucifix from the canopy above the alter is now hanging on a wall in the tower.

The floor of the apse, as well as the altar, was made of marble. This was extended with Pantelicon marble from Greece when the chapel was converted. The original altar rails have been reposotioned along the north wall of the Ucheldre Kitchen and will form part of a memorial exhibition of the convent. The altar fronts have been placed in the courtyard garden outside the Ucheldre Kitchen where they form a quiet corner. 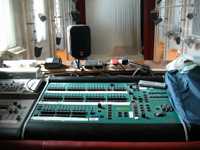 Sound desk at the rear of the main hall

The interior of the main hall has been changed surprisingly little, though exhibition boards now often hide the side walls. The tall windows are as they were — though with some new stained glass in places, and electrically-controlled blinds to enable the hall to be quickly darkened for evening performances in summer. Many of the pillars still have their original candle-holders.

From time to time the exhibition boards from the side of the main hall are moved, revealing the original Stations of the Cross — all except one, which went with the nuns when they moved to their new convent house in Longford Rd, Holyhead. 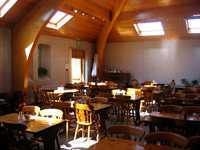 The architect of the Ucheldre Kitchen, Keith Brettell, was asked to find a way to recapitulate, in a modern way, the first impression the visitor has on entering the main hall. The solution uses Scandinavian pine on four massive beams, which gives a sense of lightness and space. The construction work was carried out by Claytons of Bangor. 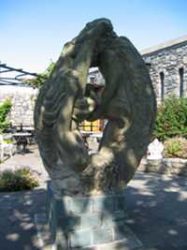 ‘The beginning of life’ by Temur Lomidze

The garden beyond the Ucheldre Kitchen forms an outside courtyard, designed to provide a special space for visitors wanting to reflect on the spiritual side of the building’s history. There are several large pieces of sculpture. The fountain sculpture uses some of the marble from the former altar, and is by Anglesey-based Trefor Fôn Owen.

In 1999 a large sandstone sculpture The beginning of life by Georgian sculptor Temur Lomidze was added. Artworks, Wales assisted financially with this sculpture and Stena lifted it into place. 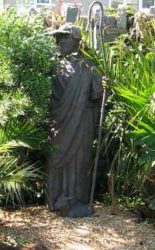 November 2000 saw the unveiling by Ieuan Wyn Jones of a statue of the Good Shepherd by Kevin Harlow. It is thought to be the only public millennium statue of Christ in Europe.

The statue nicely complemented the original intention to use the back garden as a ‘quiet space’. The garden contains a corner where we have placed the marble fronts from the three chapel altars. 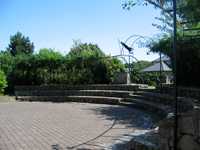 On the other side of the building is an outdoor amphitheatre, used for outdoor drama.