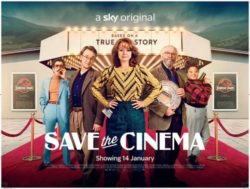 Written by Piers Ashworth and directed by Sara Sugarman. The film stars Jonathan Pryce, Samantha Morton, Tome Felton, Adeel Akhtar and Susan Wokoma. Based on the true story of Liz Evans, who in the 90s starts a campaign to save a local Cinema/Theatre (the Lyric Cinema) in Carmarthen. With the help of local politician Richard Goodridge they get Steven Spielberg to show a premiere of Jurassic Park at the Cinema in a bid to Save The Cinema